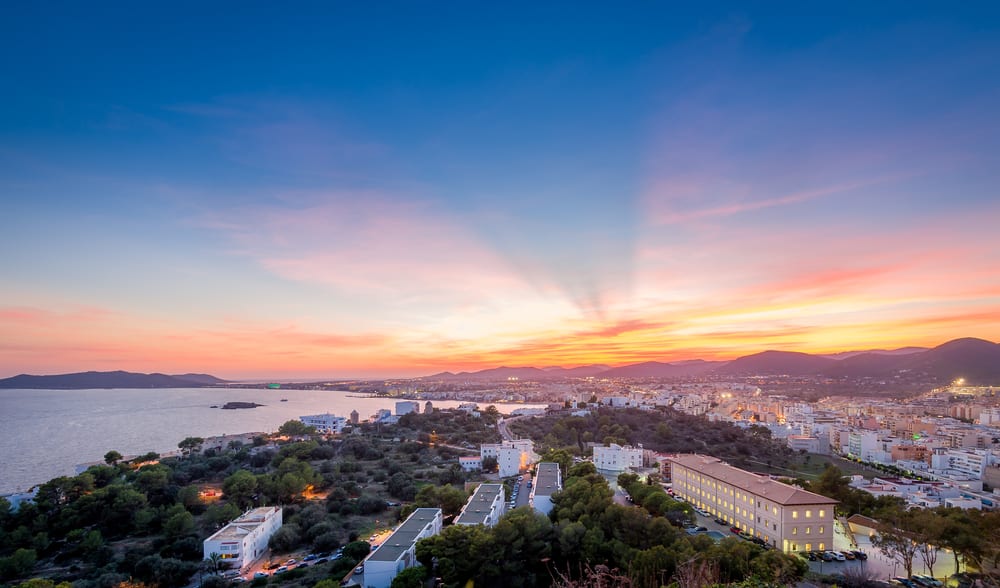 Ibiza is a surprisingly small island some 150 km from mainland Spain in the Mediterranean Sea. It covers a total area of just 572 km².

Following the ‘Reconquista’, the reclaiming of the Iberian Peninsula from the Islamic State, which reached Ibiza in 1235, the island was roughly divided into four quarters as a reward for each of the warlords who had funded the reconquering of the island. The spoils of war!

San Joan de Labritja is the smallest of the four municipalities with a total area of 121 km² and encompasses almost the entire north coast of the island. This is a rugged coastline of cliffs where the hills of San Joan meet the sea, consequently, beaches are few and far between by Ibiza standards.

The main tourist resort in the municipality is the village of Portinatx, which is the most northerly bay on the island and, in fact, feels far removed from the rest of the island.

There are two other resorts:

Puerto de San Miguel is about halfway along the northern coast and lies at the foot of a steep hill down from the hilltop village of San Miguel. This bay boasts a couple of hotels, restaurants, and shops and is adjacent to the renowned Benirras beach. This is famous for the hippy drummers who celebrate sunset throughout the summer months, while the sun sets into the sea behind the iconic rock variously known as Cap Bernat or the Finger of God.

The other tourist resort is to be found at the very northern end of the east coast. This is called Cala San Vicente and boasts a fine long beach overlooked by two large hotels and a promenade with plenty of bars and good restaurants. As a northern outpost of the island it was one of the last areas to gain access by road as, like Portinatx, it is cut off from the rest of the island by a ring of hills.

Since most of the municipality consists of pine-covered hills, to which the capital ‘village’ of San Joan is the gateway, the area is almost entirely rural and has a total population of less than 6,000.

It is, however, one of the most popular areas for those seeking to get away from the rat race to enjoy the peace and tranquility that the island enjoyed before the advent of mass tourism. 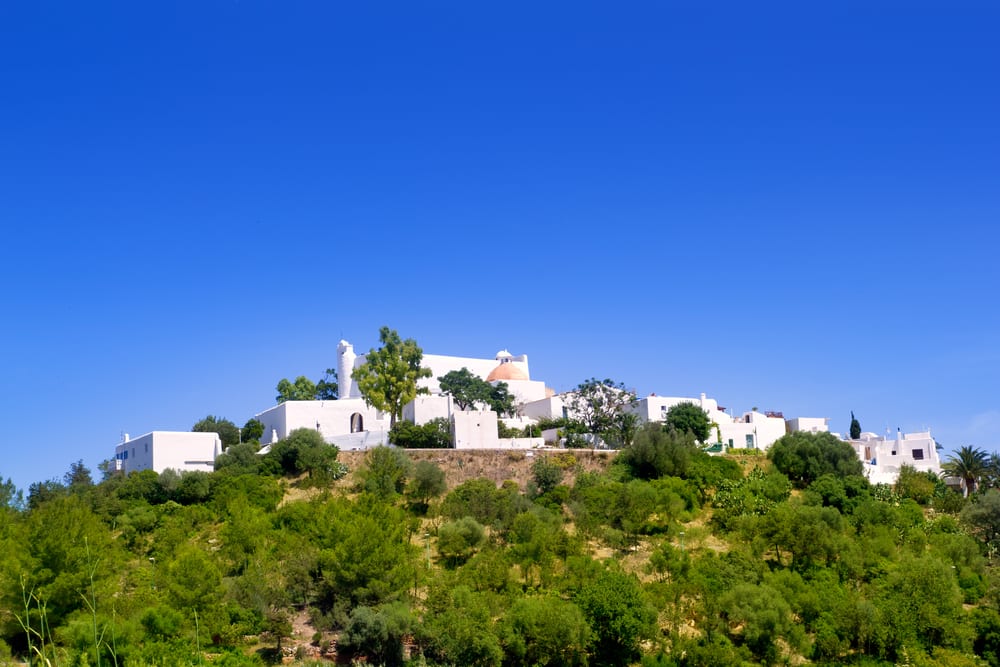 Santa Eulalia del Rio municipality encompasses almost the entire east coast of the island from Cala San Vicente in the north to the fringes of Ibiza town in the south. It extends to some 153 km² including the village of Santa Gertrudis and surrounding areas in the center of the island.

The bustling market town of Santa Eulalia lies halfway down the east coast at the point where the only ‘flowing’ river of the Balearic archipelago meets the sea. There isn’t much of the river left to enjoy, because along most of its length it flows beneath the surface of the riverbed. An unfortunate byproduct of the demand for water to satiate the growing numbers of hotels on the island…

Nevertheless, down the centuries the presence of the river has allowed the creation of highly productive arable land, as it is easily irrigated and largely flat to gently undulating. Being the bread basket of the island it was regularly targeted by marauding pirates, hence the imposing and heavily fortified hilltop church that guards the entrance to the town as you cross the river.

Santa Eulalia is the second largest town on the island and, despite being the east coast’s biggest tourist resort, remains busy all year round. It is this aspect that attracted many famous faces of the 1950s & 60s to settle in the area and build a significant community of early ex-pats.

The town itself has two beaches and the coastline heading north to Cala San Vicente features a string of beaches of differing character as far north as Aguas Blancas – the first ‘official’ nudist beach in Europe. En route, you will find Es Canar, which has a well-protected bay, and a lovely beach and is a favoured destination for predominantly British tourists.

Similarly, heading south along the coast from Santa Eulalia you will encounter the fjord-like bay of Cala Llonga. This too is a resort village favoured by British tourists and, indeed, many British residents. Alongside that, on the hills between Santa Eulalia and Ibiza town, there are two other large urbanizations, Roca Llisa and Can Furnet, with significant German populations.

The municipality is generally considered to be the part of the island favoured by families and older folk, as it is far away from the famous nightclubs and more glitzy tourism that accompanies them. As the second largest municipality on the island, it has the largest resident population of almost 40,000 compared to Ibiza town itself with some 50,000 inhabitants. 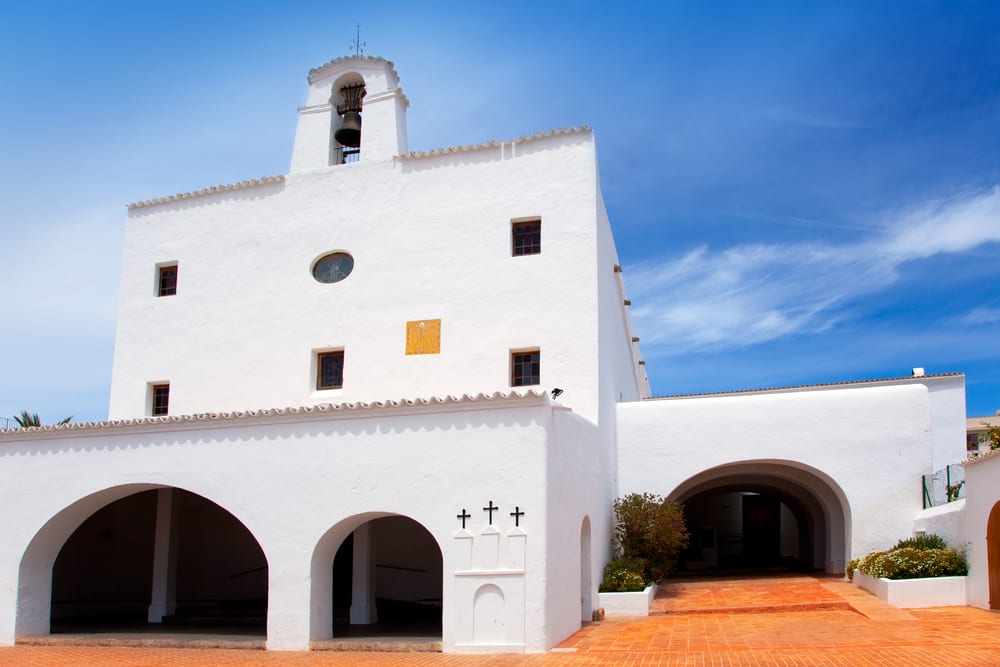 San José de Sa Talaia, in the southwest of the island, is the largest municipality covering 159 km² and includes the entire south coast from Playa d’en Bossa in the east, then extends up the west coast as far north as San Antonio. If you draw a straight line between Ibiza town and San Antonio everything south of that line is part of the municipality of San José.

Much like San Joan in the north, the area consists largely of pine-clad hills including the highest point on the island – Sa Talaissa at 475 m. However, unlike the north, it boasts many beaches along almost its entire coastline.

The main tourist resorts are Cala de Bou on the southern side of the Bay of San Antonio, where hotels line a coastline dotted with numerous beaches. The beachfront promenade extends to nearby San Antonio, which is within walking distance for the most part.

At the other end of the San José coastline is the tourist resort of Playa d’en Bossa, where the relatively new Ushuaia Tower and Hard Rock Hotel dominate the skyline.

These both stand across the road from where the world-famous Space discotheque stood, having closed its doors, it’s now been replaced with the club New mega club Hi!. For obvious reasons, Playa d’en Bossa attracts large numbers of young clubbers each summer.

Heading west along the coast you then enter the Salinas Nature Park, which includes the impressive salt flats flanked by the beaches of Es Cavallet and Ses Salinas. You will often see flamingos feeding in the salt pans here. The Park also encompasses the World Heritage Protected seagrass meadows that extend to Ibiza’s nearby sister island of Formentera and beyond. This is the oldest living organism on the planet!

The south coast meets the west coast at the Es Vedranell Nature Reserve. This is another World Heritage Protected area and includes the mystical island of Es Vedrà, a spectacular extinct volcano that is thought to be one of the most magnetic places on earth. To give you a feel for its extraordinary presence, it is 413 m high (60 meters shorter than the highest point on the island) and rises almost vertically from the sea less than 2.5 km offshore.

The administrative center of the municipality is the village of San Josè, which stands on the side of Sa Talaiassa. Like many of the other larger villages on the island, it is dominated by an impressive fortified village church.

The municipality of San José has seen the most rapid growth in population over recent decades, but still only contains around 26,000 inhabitants. It has proved to be a popular area for those buying property as the west coast enjoys the often remarkable sunsets, while the south coast is dotted with trendy beach clubs and numerous beach restaurants that stay open all year round. Sa Caleta, Yemanja Jondal, and Es Boldado are fine examples. 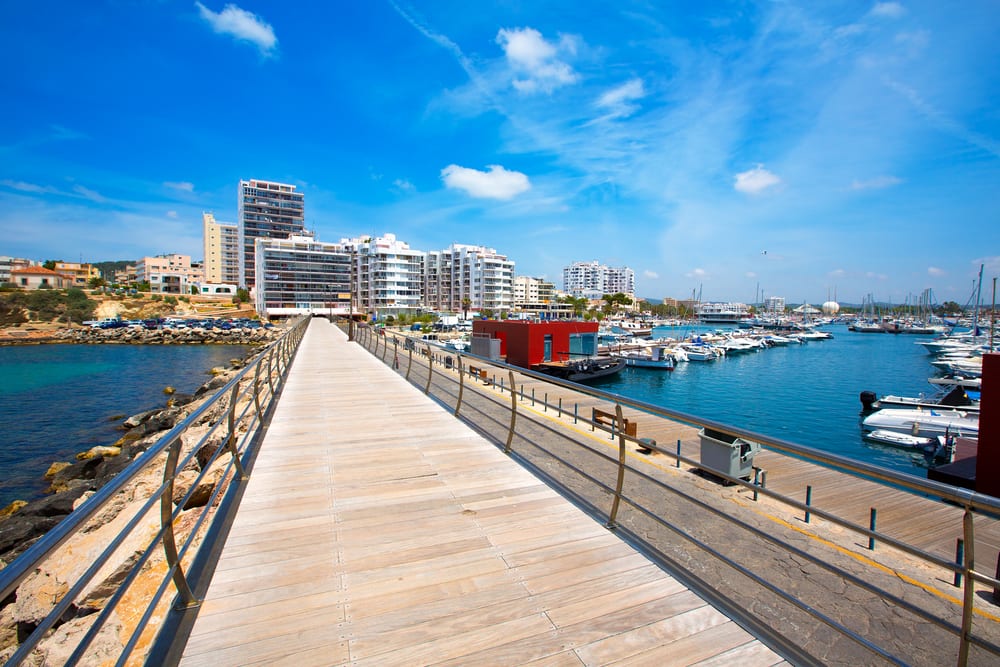 San Antonio de Portmany municipality covers the northwestern corner of the island and, again, this section of the coastline is rugged with cliffs predominating where the hills of the north meet the sea. As in the case of neighbouring San Juan, beaches are in short supply.

The only tourist resort in the municipality is the capital town of San Antonio, which was home to the first hotel on the island and consequently became the island’s original tourist centre in the 1950s. In those early days, it was frequented mainly by people travelling under their own steam. They were predominantly wealthy yacht owners and delighted in the posh restaurants and music (piano) bars of the area we nowadays refer to as the “West End” of San Antonio. Their Roman predecessors considered the bay to be one of the finest natural harbours in the Mediterranean, earning the prestigious title of ‘Portus Magnus’.

Nowadays, the “West End” of San Antonio is more likely to be the realm of youngsters enjoying their first holiday abroad without parental supervision. Almost without exception, seasoned visitors to the island acknowledge that their initiation to the island came in their youth, courtesy of San Antonio…

Heading east from San Antonio towards the largest of the municipality’s villages, San Rafael de Sa Creu, you pass through a wide valley of arable farmland before reaching the village and the descent into Ibiza town.

Heading north from San Antonio you soon climb into the hills of the north before dropping slightly onto a plateau ringed by hills with a tiny hamlet called Santa Agnès de Corona (Corona means crown). This plateau is renowned for the thousands of almond trees planted there – a spectacular sight and an age-old excuse for a day out in February when the trees all burst into bloom.

Continuing further to the east where the two municipalities of San Antonio and San Joan meet there is another small hamlet on a similarly elevated plateau called San Mateo d’Albarca.

This northern area of the island remains almost unspoiled – as it would have been a century ago, but with proper roads to allow us all easy access…

The final municipality of the island is the city of Ibiza itself and consists of little more than the city and its suburbs. It covers an area of just 11 km² but contains over a third of the island’s total inhabitants – over 50,000 out of a total island population of approximately 140,000.